Romantic Bed And Breakfast Getaways For Couples In Newport, RI

The History of the Ivy Lodge:

First bought, in 1850 for $270, the Lodge was a humble farmhouse owned by John Wilbour. Passed between owners, in 1880, Civil War General James Van Alen bought the deed to the land and reconstructed the property.

The Van Alen family fortune came from railroads and was doubled by interests in banking. The general’s son, James Van Alen Jr., married the luxurious Mary Astor, who unfortunately, died giving birth to their third child. Over time, in 1954, Jimmy Van Alen, the great grandson, transformed Newport Casino into the world-famous Tennis Hall of Fame, which still prospers today.

General James Van Alen sold the property to Dr. Leroy Satterlee in 1884. Dr. Satterlee is best known for having taken the first x-ray picture. Dr. Satterlee particularly did not think the house was arranged well for their summer purposes; so, in 1886, the farmhouse was fully torn down with intensions to make a summer house for his family. He created an elegant structure that lent itself to being called one of the historic, “Cottage Mansions,” of Newport. The alterations and improvements were executed by Mr. J.D. Johnston, the builder, of which he added one more to the many famous “cottages” he had erected in Newport.

The fireplace in the Foyer is of similar design to one designed by Stanford White which resides in the Breakers. Stanford White is best known for the designing the Rosecliff mansion and the Newport Casino.

The design of the foyer entry has been critically acclaimed as one of the most standout foyers in Newport. It is finished in old English oak, up to the peak of the roof and is about 33 feet from floor to ceiling. The walls are paneled and there is no plaster in any part of the hall. The heavy beams of the roof are exposed and produce an effect from the floor below. The house features 15 working fireplaces and 9 guest rooms.

The house features a mural which depicts Newport in 1740. The mural is a replica of a famous lithograph by JP Newell a local artist who created the Lithograph in 1865. 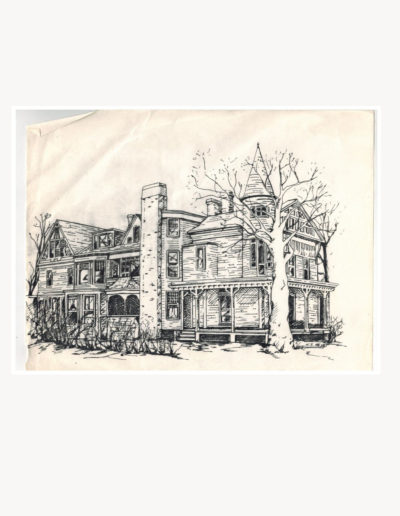 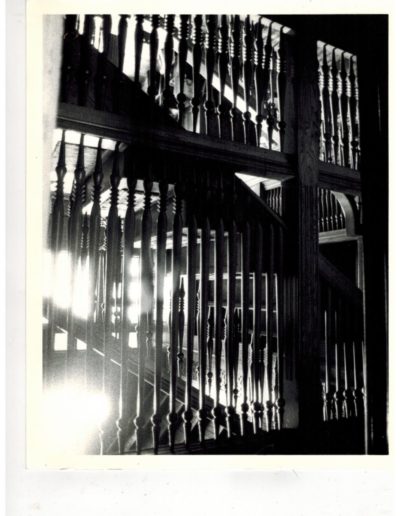 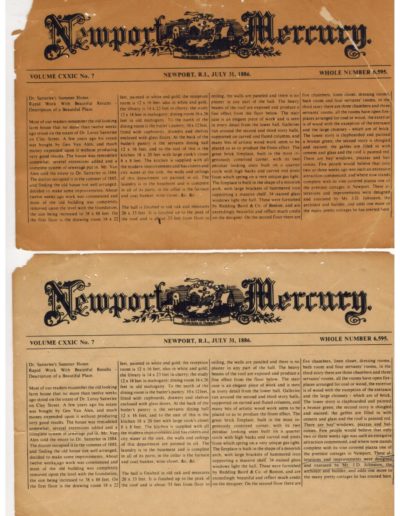 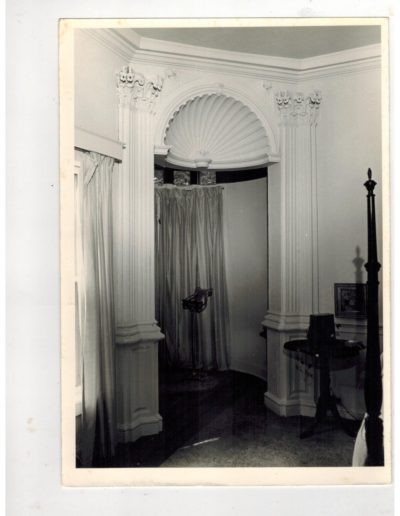 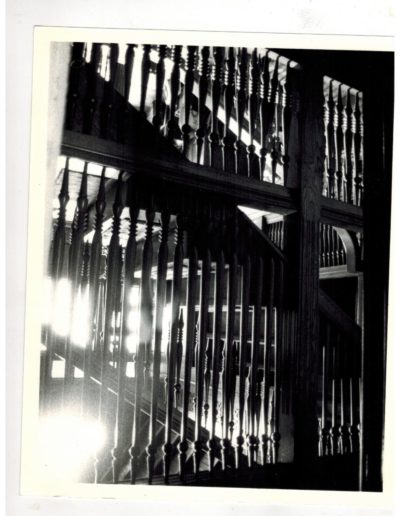 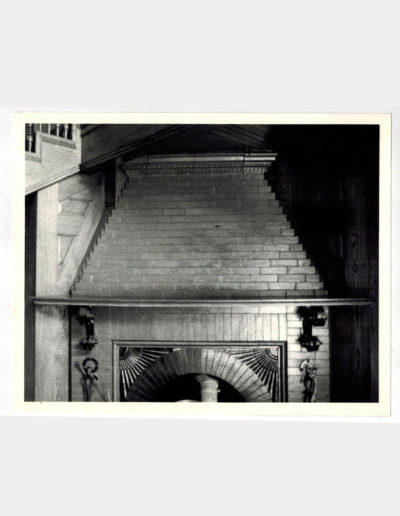 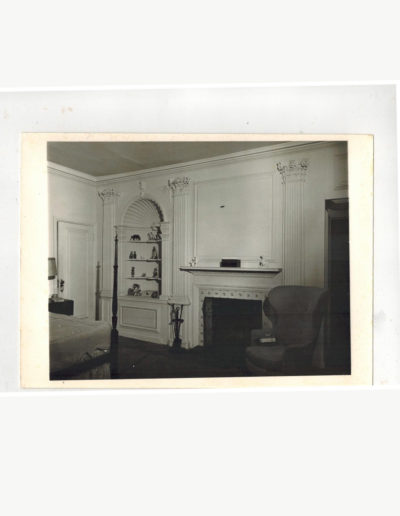 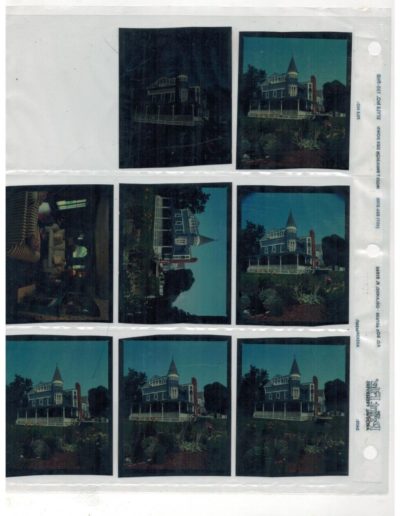 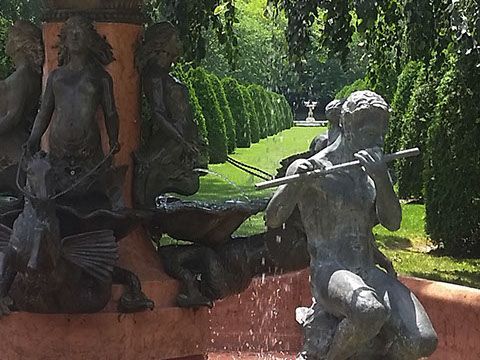 It’s exquisite and beyond beautiful!

Dear Don, we haven’t checked out yet, and are already looking forward to our next visit! We will stay no place other than the Ivy Lodge! It’s exquisite and beyond beautiful! We absolutely loved our perfect stay here!

Thank you so very much and we can’t wait to stay here again very soon!

My parents and my aunt and I really enjoyed our stay at the Ivy Lodge last week on Monday and Tuesday nights. The rooms and beds were very comfortable, the breakfast was delicious both days and we availed ourselves of the different seating areas outside and inside several times. We also enjoyed meeting a few of your other guests.

My husband and I just returned from a 5 day stay at Ivy Lodge. This was our 3rd visit and we are already planning our 4th. The home is lovely, comfortable and spotless. We feel as though we are staying with friends and family. Don and Jacqui are so welcoming and accommodating we couldn’t ask for more. Every room is different and each is a gem. Breakfast every morning is such a fun time, not to mention delicious.

We were able to take advantage of the EBikes that are there and had a wonderful morning biking all over Newport. We walked over to a Mansion for a tour, which was right around the corner. We also walked over to the Cliff Walk. The location is truly ideal.

I can’t imagine staying anywhere else when in Newport. We were joined by some friends for this visit and they were as taken with the Ivy Lodge as we are.

The inn is gorgeous, clean, and well kept. The entryway alone will take your breath away. The breakfasts were delicious. We greatly enjoyed our stay in the Library room. We will definitely be back. I would absolutely recommend the Ivy Lodge to anyone visiting Newport.

If I Could Rate 6 Stars I Would

“Cannot say enough good things about this place! The owners were friendly, nice and helpful with everything and anything. The lodge itself? Absolutely stunning! We felt as though we were staying in one of the mansions we were there to see. Close to all of the action. Very clean. Breakfast was delicious! Wish we could have stayed longer.”

Lovely stay with very welcoming staff and a tasty breakfast. Really appreciated the snacks and hot chocolate available on arrival. Stayed in the cozy Pine Room with very well appointed bathroom—loved the deep soaking tub. The hallway and staircase are just stunning, as are all the common rooms. Convenient to the Cliff Walk and downtown area which had lots of eating choices. Would stay again.